Multi-touch input: when is it really needed?

Multi-touch input is an emerging input modality where several point of pressure can be detected on a surface.

To a great extent the success of graphical user interface was that it was possible to perform direct manipulation of graphical objects with minimal effort, namely pointing and clicking. The mouse lies on the table and does not need to be continuously held by the user. Then, switching from mouse to keyboard is very easy (even better with touchpads in laptops).

Now with multi-touch screens the user has to make the additional effort of point on the screen with two hands. I see it comfortable only in the situation where the screen is a tablet. But still in this case the multi-touch feature is not really needed because the user hold the tablet with one hand and interact with the other. If the multi-touch screen is a tabletop as in the case of the Diamond Touch or the Microsoft Surface, then I see a possible comfortable use, especially for multiple users.

Then there is the case of multi-touch input on portable device such as the iPhone. In this case I believe that the multi touch feature is not really necessary. Users of mobile devices use only one hand and one finger.

A strong case for multi-touch input is touch pads in laptops. As in the case of the new Asus EEPC and the new Apple MacBooks, the possibility of making gestures with two touch points is very useful. This is true because when the hands are on the keyboards the two thumbs are naturally located on the touch pad affording for combined movements.

My conclusion is that multi-touch input is not applicable everywhere and one shoud be careful to not force the user in making unnatural physical movements for interactions that can be made effortlessly with simpler input devices.
Pubblicato da Unknown a 11:40 AM No comments:

I participated to a survey on political issue in Switzerland issued by Perspektive Schveiz and I got this nice diagram that shows my political position compared to the views of political parties and average people in Switzerland.

I am very proud of this result because it combines liberality with left-wing views, often considered (mistakenly) as incompatible. 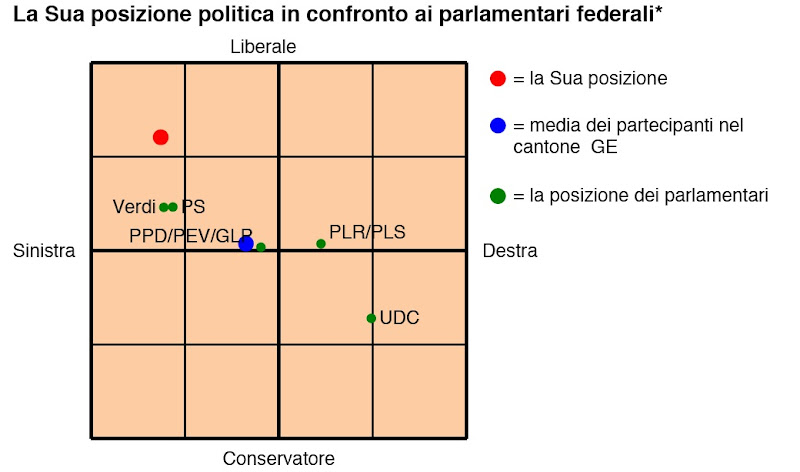