By language, it's her fault... 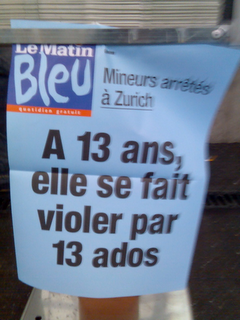 By language, it’s her fault…

Looking at this Swiss news headline in the picture, which roughly translates into English as “She let them rape her”, the rape situation is framed as if the alleged victim had caused the criminals to commit the crime. That’s not much different than say that “almost naked women deserve to be raped since they are all ‘exposed meat’” as recently stated by a Muslim leader in a public speech in Australia.

Use of language to frame situations and concepts in different (and often opposite ways) is currently used in political discourse as pointed out by George Lakoff throughout his work on metaphor and in particular in two of his books, namely “Moral Politics: how liberals and conservative think ” and “Don’t think of an elephant ”.

Language can be used as a weapon that kills freedom much as terrorism. I believe that people need to better understand language and this is only possible through education. Education does not always equate to schools. By education I basically mean awareness and access to information. Since there is no unique way of “framing” information, so the solution would be to access to multiple (inevitably subjective) views to the same information. Moreover it is necessary to understand how language constructions in different languages already provide a frame of reference that is unconsciously rooted in speakers of a specific language. The solution to this problem would be learning different language and share cultural values across national boundaries. A condition for doing so is of course the elimination of physical borders and providing free access to information.

Since most of people are lazy enough to learn foreign language, automatic translation might help. The problem is, however, that machine translation systems do not currently embody knowledge about different framing of the same situation in different languages. In other words, if we translate the above headline from French into Italian we get a truly different connotation of the fact: “Si è fatta violentare”. Of course, common sense resolves here the misinterpretation. But what about a direct French to Arabic translation where the wrongly depicted situation would have a legal status? Isn’t this misinformation?

One way to (technologically) address the problem is to build better translation dictionaries where constructions (multiword expressions) are correctly translated. Moreover, these constructions should be considered in the context in which they appear in order to be linked to the right corresponding construction in the target language.

A major effort toward this direction is undergoing within the FrameNet project at the International Computer Science Institute, Berkeley . This project is leaded by Prof. Charles Fillmore and is part of a larger initiative supported by the University of California at Berkeley on Cognitive Linguistics .

Another relevant work towardsreliable automatic translation is that of Violeta Seretan on Collocations . Collocations are groups of words that tend to go together in language. Usually collocations are translated differently across languages, especially when language stem from different roots (e.g. Latin, Germanic, Semitic, Asiatic). Words are not isolated entities in language. Rather they are as molecules with different valences. They have tendencies to bind with other words (molecules) according to a given context (the solution). That’s why is important to take words together and study their interconnections. It is not just a matter of syntactic well-formedness. It is more about conventions, cultural biases and historical development.

Language is a complex phenomenon that deserves more (scientific) investigation. Unfortunately it is not always the case since many projects in human language technology focus more on practical solutions for limited scope problems. Naïve machine translation (such as that you can experience through Google) works 60-70% of the time and it does not take into account the language subtleties such as that we have discussed so far.
Pubblicato da Vincenzo Pallotta a 11:12 PM 1 comment: