As it is common for many people living in several locations, I have several iTunes accounts. It happened I purchased (well, it was free, but technically it's the same) an App from the Swiss App store which has now been removed. However, the app is available in another country's App store for which I have an account.

Now, when I am connected to this App store my iPod detects an update of the application (from a different country's App store from which it has originally purchased). When I try to update it, it asks me again the original country's App store account password, which I provide. But the result is that it bounces back to the other App store and tells me that the app is no longer available.

Currently, I don't see any workaround for this problem.

Of course, it is in general very annoying having to switch from one account to another for updating the apps (including selecting the different iTunes stores and wait that everything loads).

Pubblicato da Vincenzo Pallotta a 10:18 AM No comments:

This is funny!
It seems that Google Translate uses prediction as in Google Instant Search but in a strange (and inconsistent) way.
I was looking for the English translation for the Italian "andare d'accordo".
I typed the this: "Andare d'acc" and Google immediately translated into "get along" (see picture below):

Then, once I completed the expression, Google changed its mind and gave a different (wrong) translation:

I cannot actually explain this strange behavior. Any comment about that is really welcome. :-)

Interview on Digital Natives on RSR

I have been interviewed during the LIFT 2010 conference by Radio Suisse Romande (RSR) and the interview has been broadcast today as part of the Médialogues program. The episode (and the interview) is now available as a podcast on the RSR site.

Natural Language Processing is at the core of information technology, especially now that information is pervasive, distributed and easily accessible.
In this event we will gather researchers and professionals in the field of computational linguistics to discuss around the current challenges and implications of processing natural language for the information society.
The event is made of two parts:
1. In the morning and early afternoon, the scientific workshop DART2010
2. In the late afternoon, a panel of local researchers and professional in the field of Human Language Technology. Each panelist will give a short presentation and afterward the panel will answer question from the audience.
The full event is free of charge and it will be followed by a cocktail offered by the Webstr University Geneva.
Pubblicato da Vincenzo Pallotta a 2:12 PM No comments:

Why must I always restart my computer in Windows?

Look at this alert: 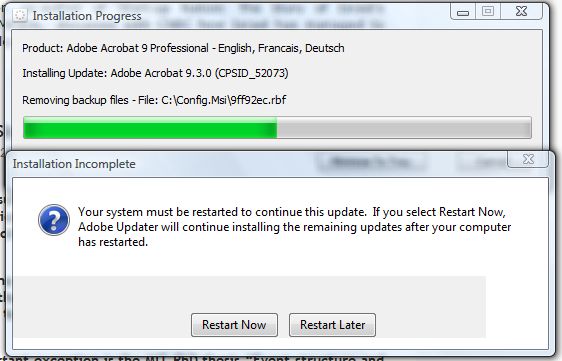 Shame on both Adobe and Microsoft because I don't really see the need of restarting the computer to install UPDATES of an application. This of course never happens in Mac-OSX or Linux.

From the user's perspective this is an ANNOYING service disruption. I agree that my applications should always be up-to-date, but I cannot accept that I have to stop, wait for reboot and resume my work just for updating applications.

This is not something that happens sporadically, it almost always happen and, worse, the user is almost never warned in advance that the system need to be restarted before installing the updates. This is a system design flaw which affects system's usability. Usability is not just fancy, colourful or transparent GUIs as it seems Microsoft is almost exclusively focusing on. I believe that these guys has to think about a more holistic view of usability which of course includes the notion of  UNOBTRUSIVENESS. In other words, please help me in doing my work without hassle.

Abstract: Human Language Technology is essential in coping with today's information overload. To scale up, it must be robust and capable of making sense of noisy data. This book explores the topic of cognitive language engineering as a key for robustness. It can be used by students and practitioners alike, as a computational linguistics textbook and as a toolbox
for building robust natural language understanding systems.
Keywords: Language, Computing, Linguistics, Information, Understanding, Cognition, Intelligence,
Knowledge, Semantics, Software.
About this book:
"Pallotta's insight and critical discussion of the underlying mental models are core issues of present-day cognitive language engineering" [Prof. Hon. Giovanni Coray, Swiss Federal Institute of Technology Lausanne, Switzerland].
“From a computational linguistics perspective Pallotta's book provides students and researchers with a powerful toolbox and many examples of real-world applications.” [Prof. Rodolfo Delmonte, University of Venice].
"Pallotta’s work on cognitive language engineering is a stimulating and well written treatise on models for computer applications that can interact using natural language. Practical and robust natural language systems begin to become a reality with this
fascinating work." [Dr. Afzal Ballim, Computational Linguist].